The heart of yoga is mysticism, the universal experience of conscious communion with God or ultimate Reality. Mystics arise in all religions and spiritual traditions in all times throughout history. They are lovers of God, seekers of the highest Truth. We commonly think of mystics as yogis in the cave of samadhi, experiencing higher states of consciousness, or as saints from various traditions enraptured by direct encounter with God. We don’t often think of them emerging from their prayer chamber or meditation cave and walking right into the messy fray of public discourse let alone joining a protest march. Yet, we don’t have to look far to find them to draw inspiration from them. They shine from the West and from the East.

One great mystic who shows up as a model of socially engaged spirituality is Abraham Joshua Heschel. Read his writings and be introduced to the mystic heart: “Awe is an intuition for the dignity of all things… It enables us to perceive in the world intimations of the divine, to sense in small things the beginning of infinite significance, to sense the ultimate in the common and the simple: to feel in the rush of the passing the stillness of the eternal.” [1] The iconic photo of him marching in Selma with Dr. Martin Luther King and his commentary on that experience, “I felt my feet were praying”, demonstrates how our mystic heart can connect with our activist feet. Show up with a prayer in your heart and willingness in your feet.

The great mystic yogi, Paramahansa Yogananda, saw directly into the heart of Reality and recognized the truth that all people are emanations of one ultimate Reality. In light of that realization, he knew that racism was an outgrowth of ignorance. He didn’t hesitate to speak out against it, telling people that “Color prejudice is the most foolish of all man’s displays of ignorance. Color is only skin deep…To have any color prejudice is to discriminate against God, who is sitting in the hearts of all the red, white, yellow, olive, and black peoples of the world.” [2]

For those of us on a contemplative spiritual path, finding the juncture of meditation, contemplative life, and social action can be a conundrum. When I talk to people lately, I find that many are concerned about social justice issues but shy away from engagement. Sometimes this is for good reason. After all, if we are sincere about cultivating a sattvic lifestyle and a peaceful mind, why risk losing our balance?

In a recent article, Let’s Stand Up Together, Bhikkhu Bodhi wrote about this reticence, noting several reasons why Buddhist practitioners might not enter the social justice arena. Among those reasons he cites seeing dharma as a path of personal happiness pursued in the privacy of meditation, fears that activism may disturb our peace, beliefs that getting involved with worldly events is ultimately getting entangled with illusion, or concern that we must not risk alienating others by expressing our convictions. He issues a call to pay attention to the times and move beyond our resistance, stating, “We’re entering a turbulent time when it won’t be enough for us merely to adopt the dharma as a regimen of resilience, a means of maintaining inner balance against the shock waves rippling across the social landscape. We’ll need a bolder agenda, a program of collective resistance inspired by a radically different vision of human interconnection, one that affirms our duty to respect and care for one another and to maintain a habitable planet for generations yet unborn."

Through my on-going efforts to lift up the power of nonviolence to bring forth positive change, I have stayed engaged in community and global activity over the years. Yet, it has been a while since I walked in a march or spoke out about injustice. Would I participate in the Women’s March? I went through my list of why not to do it. Then I came face to face with my conscience. For me, to not show up would be abdicating my role as a citizen and as a spiritual leader. To engage in activism with a spiritual focus meant bringing the inner peace and insight I cultivate every day in meditation into the realm of social action. Isn’t that the whole point? Isn’t yoga about union? About erasing the imaginary line between the so-called spiritual world and our material existence? Once I surrendered to that call, I put my attention on how I would show up and on what I could contribute. That is where the poem, Forward Women, came from.

I wrote the poem, Forward Women, to help us take an empowered view of the many steps toward equality that women in our country have taken over time and the importance for us to keep moving in that direction. To not turn back. Here is the poem in its entirety:

We know we can do it
backwards, and in high heels
We can, but we won’t
dance backwards, ever again

Not to the back of the bus
Because Rosa took her seat
Not to the back of the line
Because Dolores walked in front
Not to be held down, even by gravity
Because Sally soared in space
Not to sit on the sidelines
Because Billie Jean won
Not to keep silent
Because Anita spoke up
Not to quit, not ever to quit
Because Hillary kept going

We do not wait for your lead
Wait to feel the pressure
on our open palms, or the
pull at the small of our backs

We step forth,
Forward women.

We do not wait for you to lead
With sons and with daughters in hand
With husbands and with wives
Lovers and friends by our side
We march, forward women.

We do not wait for you to lead.
We are the lead. 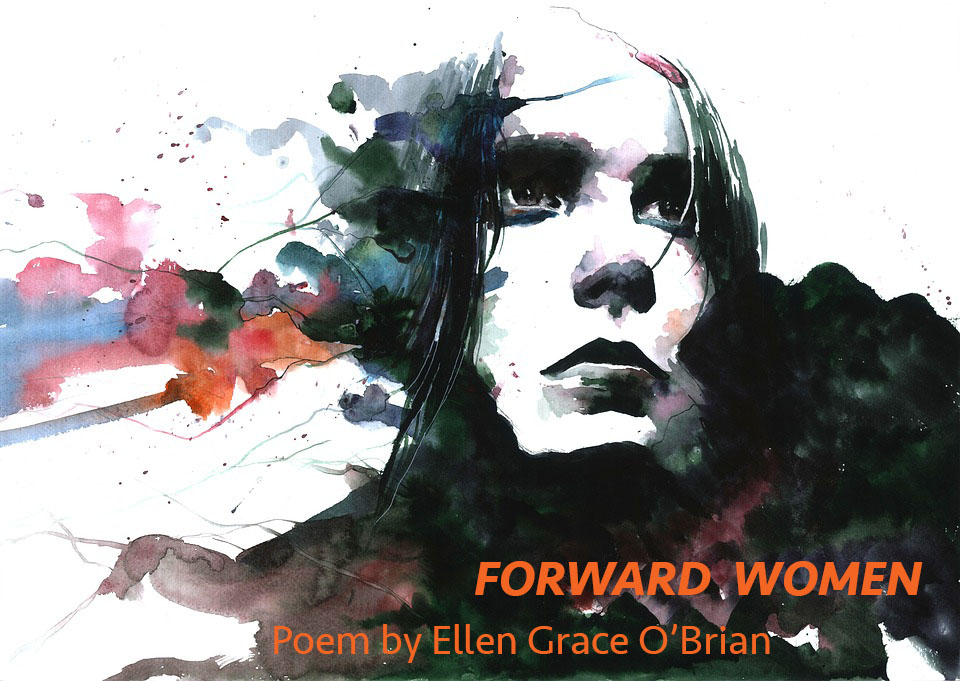 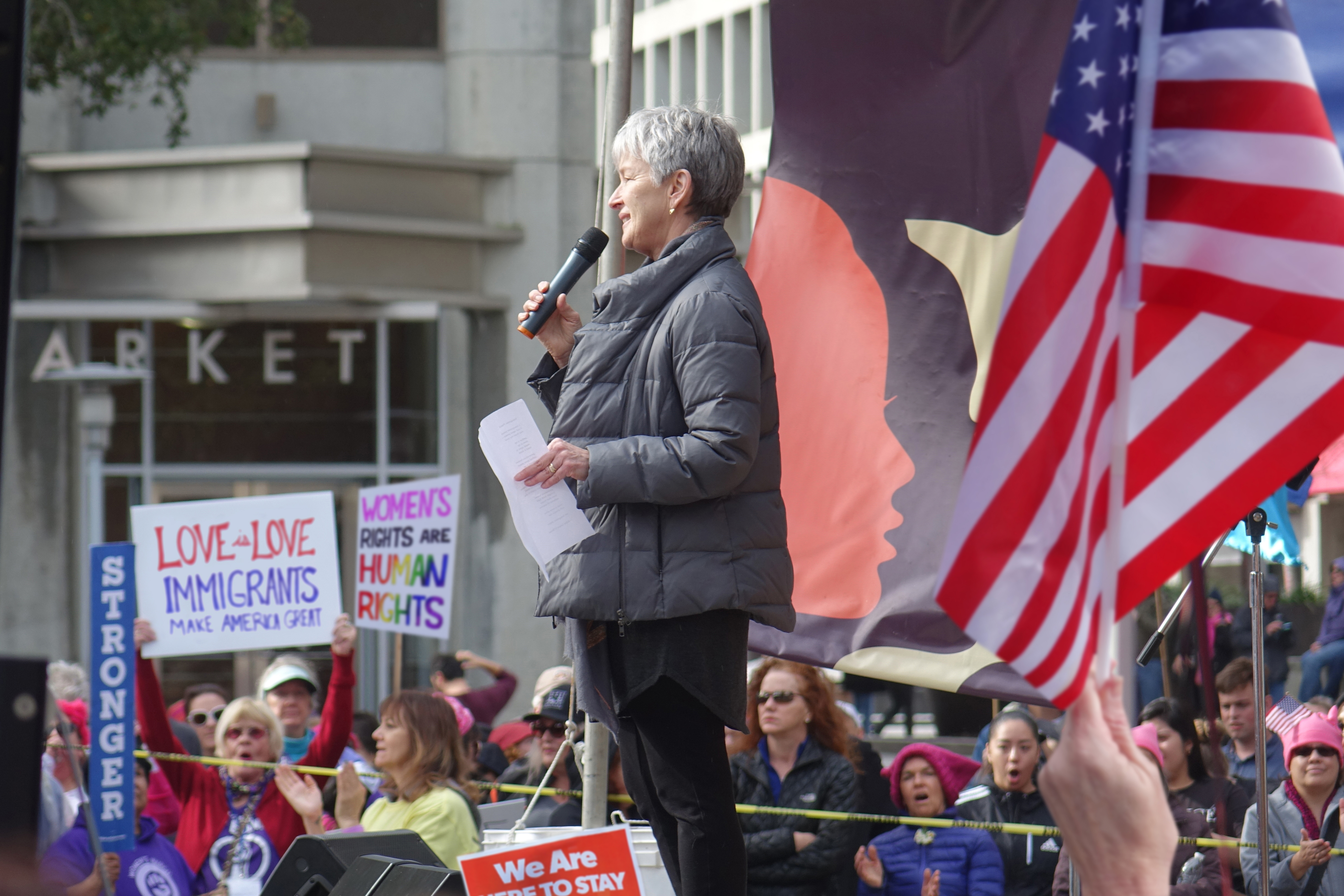 A new book of my poems, The Moon Reminded Me, has been published. Many of the poems, and the book itself, are about bringing the light of our mystical hearts to shine into our everyday life. Mending a relationship, caring for the natural world, learning how to play, mourning the loss of a loved one, all the while paying attention to the divine presence that permeates our days. Mystical hearts, compassionate hands, activist feet. We can do it. We must.

I was honored to read my poems at the Women’s March in San Jose. Among those thousands of people, it was not difficult to experience the awe that Rabbi Heschel described as “an intuition for the dignity of all things.” It helped that the march was a rainbow of humanity, an ethnically and religiously diverse group including families with infants and elders in wheelchairs. Talk amongst the marchers was often punctuated with “excuse me” if someone needed to pass by or inadvertently bumped into you in the press of a crowd of thousands making their way through the streets on the way to Cesar Chavez plaza.

As a poet, and an introvert, one of my favorite experiences of the march was reading the many handmade signs that people created. Many were calls to love and not hate, some were forceful calls to resist, others were obvious political opinion, and a few were really clever. My favorite was: It’s so bad, even the introverts are here. I could relate.

Next time, I may bring one that says: It’s so important, even the mystics are showing up.

Spirituality in the Context of Universal Values

To know Absolute Reality and our essence of being while living in harmony with the Infinite and the impulses of the soul is the Kriya Yoga way to fulfill our divine purpose. Read more 👉 https://t.co/UUZ0hD7Nmz #KriyaYoga #SpiritualAwakening
h J R
@yogacharya_live

This divine love is not emotion—it is an open-hearted awareness, the flowering of Self-knowledge. Read more 👉 https://t.co/343Kb22htK #kriyayoga #kriya #ConsciousLiving https://t.co/T70U8n9THX 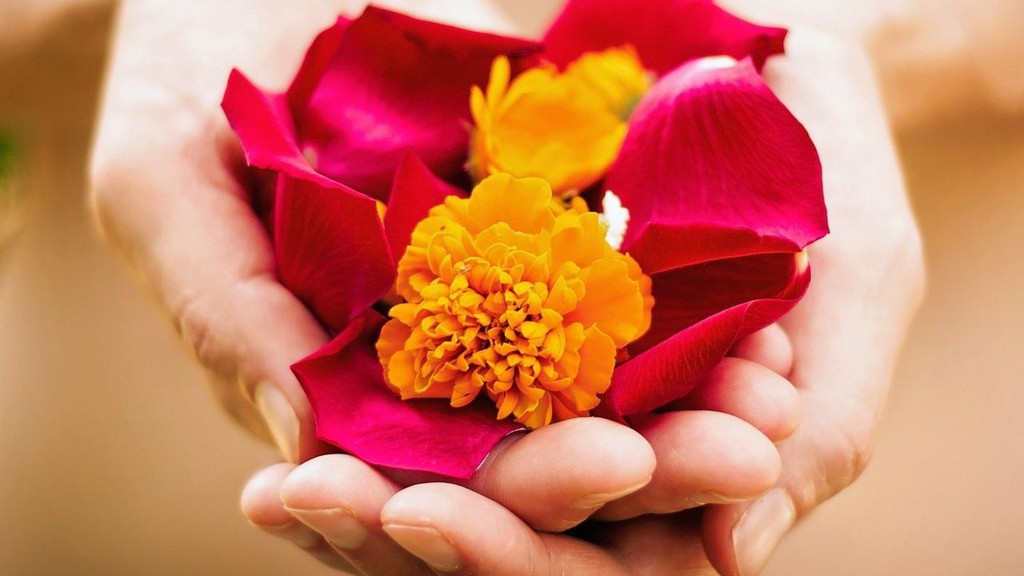 That divine power within us starts as a thought, then takes form through our speech. Read more 👉 https://t.co/IrUwEJ877M #ConsciousLiving #kriyayoga #healing
h J R
@yogacharya_live

Follow @yogacharya_live
WED, JUL 13 AT 6:30AM (PT) - ONLINE & IN-PERSONjo.my/guru-purnima-2022You are warmly invited to participate in our annual Guru Purnima yajna, an ancient Vedic ritual for healing and spiritual realization being offered online and onsite at CSE world headquarters. During this extended time of prayer, mantra recitation, ritual offerings, and meditation, we contemplate rita—the cosmic order—and seek to bring our will into harmony with divine will for the benefit of all beings.We contemplate guru—the light that dispels the darkness of ignorance. We offer our gratitude for our spiritual teacher, for our lineage of yoga masters, and for God as the Guru of all.We open ourselves to the purifying influence of the ritual and dedicate our participation to individual and global healing and spiritual awakening.Everyone is welcome!MORE INFO: jo.my/guru-purnima-2022 ... See MoreSee Less

When this happens, it's usually because the owner only shared it with a small group of people, changed who can see it or it's been deleted.

To know Absolute Reality and our essence of being while living in harmony with the Infinite and the impulses of the soul is the Kriya Yoga way to fulfill our divine purpose.Read more 👉 lttr.ai/xyom#kriyayoga #spiritualawakening ... See MoreSee Less

Simple living on the outside arises from fulfilled living on the insideRead more 👉 lttr.ai/tpQd#simpleliving #kriyayoga #consciousliving ... See MoreSee Less